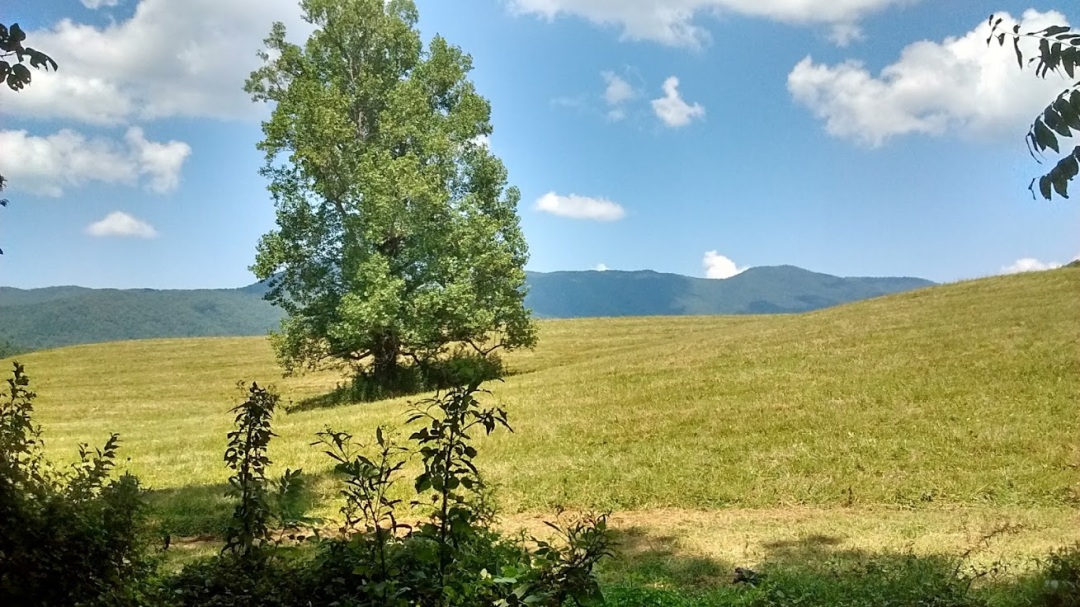 Great Smoky is a stand out park for a few different reasons, one of which is that the money was raised by LOCAL PEOPLE.  When the federal government approved the creation of the park they refused to fund it.  It was funded with local citizen donations, school children, from all walks of life, collecting nickels and dimes.  They did not actually raise the whole amount though, and both Tennessee and North Carolina funded parts of it with state funding and then John D. Rockefeller Jr, who had a passion for parks funding, donated the final 5 million.  Because the land was privately owned there were many years in court with timber and pulp companies.  When the land was finally acquired the largest companies signed the paperwork and actually clear cut the mountain tops as they exited the park, which is utterly shameful. There is a great bit about this park in the Ken Burns National Park documentary.  We visited the Cades Cove region of the park which has an interesting and rich history of it’s own.

When we stopped at the outdoor Ranger post, I threw a dollar in the box and grabbed a pamphlet, not really knowing what it was.  Since I had bought the Junior Ranger books in advance, I was looking for an actual Ranger station where they could turn it in, I noticed on the pamphlet map there was one on the Cades Cove loop, labeled 11 mi!  So back in the car we went, and down the road, right into bumper to bumper traffic.  We literally drove 5 miles an hour.  It was a single lane one way road so we were committed.  I began leafing through the pamphlet and realized that it was the history of Cades Cove told in story fashion, which was lifesaving.  As we crawled along I read the story to the children. It was a wonderful story about mountain top chestnut groves and native American families who lived there.  The inevitable American colonialism displacing the indigenous people with with white settlers.    There was a lot of information about wildlife both flora and fauna.  Lots of bears, wild boars and CHESTNUTS.  As we drove around the loop there were various pull offs for historic buildings. There were a large variety of all economic levels, this one below barely a shack, with no chinking, all the way up to fancy log cabins with multiple floors and timber homes with siding complete with personal mills!  The buildings are original because the area of the park was settled at the time of the creation and many people were bought out with the option to live on the land until their death.

We checked a few out, but the best couple I ended up staying with the car because the baby had fallen asleep.  We reached the Cades Cove Ranger station, and there were a ton of buildings to explore.  The Ranger station/gift shop was incredibly crowded, so I went in and came right back out.  It was a picturesque historic building.  The crown jewel of this portion is the working grist mill complete with water wheel! 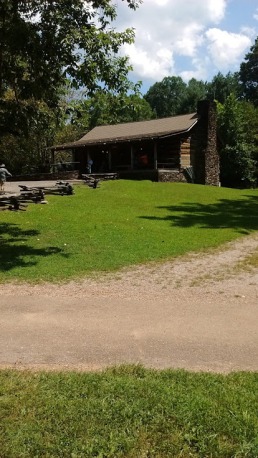 This portion was really great, we went in and watched the mill work.  It is complete with a costumed miller and you can buy wheat and corn ground into flour. Apparently there

money because of low production.  The miller also gave each kid a small handful of corn meal to throw to the fish in the pond, which later got them looked at pointedly by and employee because it violated the “Do not feed wild life in the park” rule. The mill is equipped with the original grindstones and still works every day.  The children were really interested in how the water powered the mill and watching the gears turn.  It was hard to get pictures of the mechanisms because of the crowds, but it really is something to see.  The kids each picked a flour, so we ended up with Corn Meal and and Whole Wheat Flour to take home.

One of the nicest homes was adjacent to the mill.  It was clapboard and fancy by the standards we had seen thus far but still had that “added on” construction of the time.   In the Junior Ranger booklet there were a lot of references to graffiti and not defacing the park.  While we toured this house it was horrible how many tags were on the walls.  Some even from this year.  As we exited this house we met an amazing ranger.  He was clearly very busy, but the 8 year old book had questions in it.  He squatted down and dealt with my children’s shyness until they were ready to talk, and talked to them at length, even though he was clearly busy and the park was extremely crowded. He really made their day! As he got up to go back to work, he pulled out 2 coins from his pocket and gave one to each kid.  They were commemorative Great Smoky coins and both kids were beyond thrilled.

As we left the park we stopped at the campground to see if they had the Eclipse badge since the kids had completed that book as well.  The campground was packed, but still well laid out.  As we drove around we talked about the possibility of returning for a family camping trip.  This is a beautiful park and well worth the trip.