When planning our eclipse viewing I tried to keep a couple things front and center in my mind.  1) It could be cloudy and 2) The kids may find this monumentally unimpressive.  To mitigate both of these concerns it was really important that the focal point of the trip have something great to visit in addition to being a decent eclipse viewing zone.  Great Smoky Mountains National Park fit the bill.  I had read a bit about it and I was also attracted to it being a National PARK site, because we have done a ton of the other kind of NPS sites but not many actual PARKS.  I am kind of waiting until my kids are older to do some of them because I want to be able to do some of the more rigorous hikes and really SEE the parks in a way that is not possible for us with this passel of children. I am doing this park in two parts because there is just so much to talk about, even in our short visit.  This first one will focus on the geography and nature of the park and the second will focus on the history of the specific portion we visited.

We stayed near the South Western part of the park, about 25 minutes away.  As we approached the park the landscape morphed, mountains rising, trees towering and it was so very verdant. Cell service was incredibly intermittent and most of the park was a dead zone for us which effected our google directions, so I guessed a lot of the time while driving. This was the first park we had encountered where the Junior Ranger book had a fee.  It was $2.50, and I ordered the books in advance because I anticipated  large crowds but they had more books for targeted ages and they moved in 2 year increments, so 5-6, 7-8 etc.  That was both GREAT and difficult.  Having two completely different books was more informative and the children liked it but the Nature Scavenger Hunts were very different so we had a few agonizing moments trying to complete them both.  Tired, cranky children also are irritated when you point something out that is in a siblings book and are sure to let you know that it did not HELP THEM. Also be aware that you will be turning in a bag of trash you have picked up throughout the park.  We did this but it was also tough because they were abundantly staffed the day before the eclipse and totally  on everything park maintenance wise.

offs very regularly to hiking areas.  As I said before there wasn’t a lot of service and I had failed to locate a Ranger Station before we started driving and lost service.  I did have a physical park map that would have been more helpful if I had taken the time to locate where we were entering the park, so there’s a tip!  There were larger parking areas near the clearly developed trail heads but smaller  pull offs, regularly spaced, to areas that looked like more rustic scrambling hikes.  We chose one of those, because kids like to scramble and we don’t like to encounter people.  Once we 20 feet away from the road it felt like we were in the wilderness.  The stream deadened the road sounds and the forest was thick.  I loved the quality of the foliage and the dappled sunlight that peered through.  As you can see in the picture, it wasn’t a constricting forest, lots of visibility and it really just felt serene.  One of the most surprising things were the Rhododendrons.  They were enormous trees and I had only seen them as hedges and smaller plantings. But they were everywhere, I can imagine if they were in bloom the whole park would look like an enchanted fairy bower.

We scrambled along, through the stream in places, over picturesque mossy stones and up rough, root riddled embankments in others.  We saw many butterflies, and some small fish.  The kids pointed out lots of bugs, and mushrooms but the crowning glory was the very hard to see salamander.  We actually saw quite a few after we found this one, but this one held still the longest and we all got to get really close. 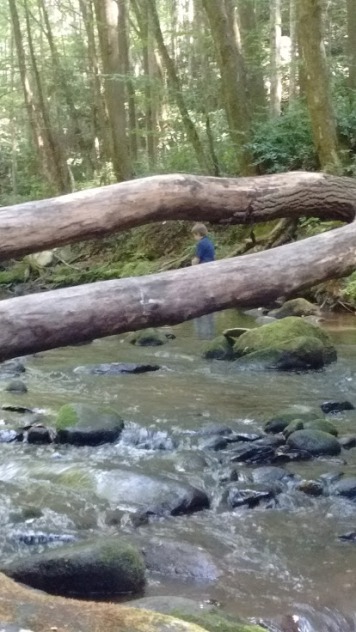 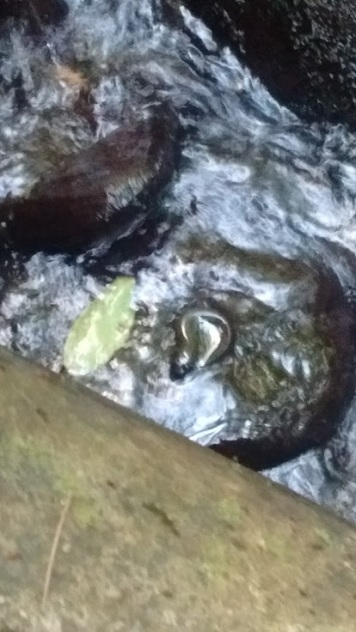 This was the most wholesome feeling of our visit.  The park was crowded and interesting, but this hiking and exploring where we followed our children was good for the soul.  As a family that is constantly together due to homeschooling and tele-working it is easy to take our time together for granted and lots of it lacks quality because of distraction and normal life.  While I get incredibly excited about history, the history of the NP system, and the scientific facts and stories from parks, to me this emotional refuge is the most important aspect to preserving these wild places.  So that there are places where we can go and be still consumed by Nature.