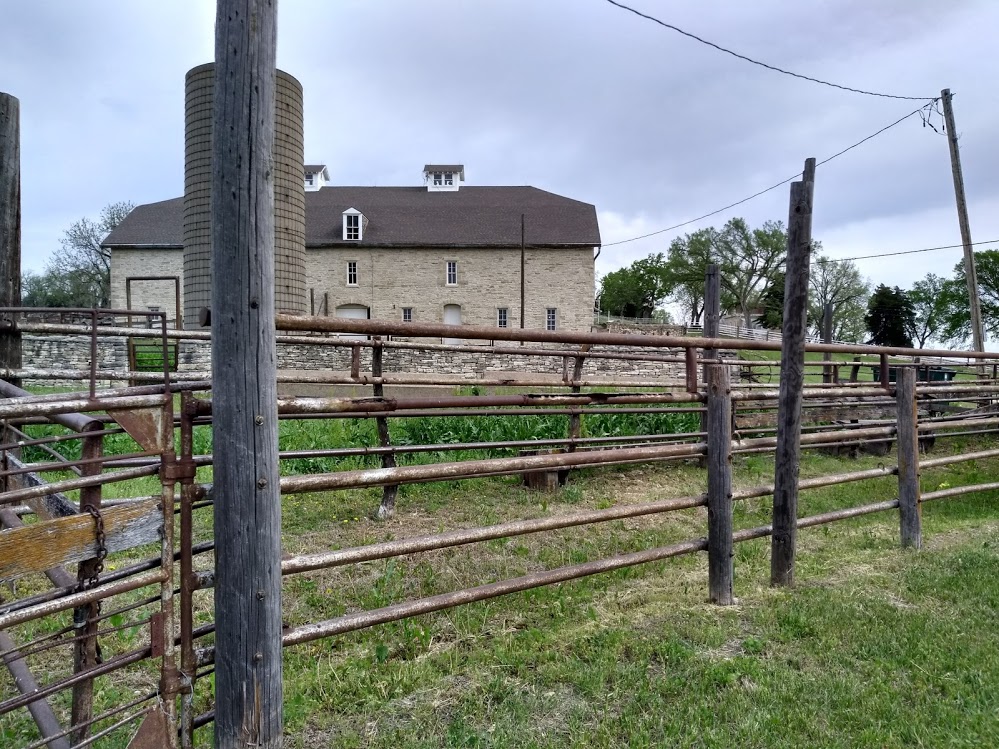 I was really excited about the Tallgrasses.   Spoiler…..there weren’t actually any Tallgrasses, because well, seasons matter.  And sometimes you can’t see the forest for the trees, and in all my planning I failed to really consider that the grass wouldn’t be tall.  BUT THAT IS OKAY.  Because there were still Buffalo.  And the ranch house on the preserve was really fantastic, though definitely a rich family’s home so it had lots of neat “technologies.” We had spent the night near the site so we could get an early start due to my excitement and still have time to drive a good bit.

We arrived and excited the van and were greeted by a steady wind.  It wasn’t really hard, but was enough to start Oklahoma playing in my head.  I like a strong wind that pushes against the body, but the kids didn’t feel the same way, even though it wasn’t that much 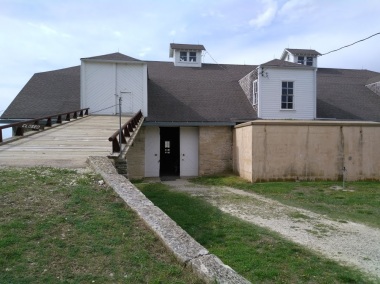 wind.  In my head I called them city slickers and out loud told them they should be glad I wasn’t raising them in New Mexico.  There were school groups there so we grabbed our Junior Ranger books and headed out to tour the buildings.  Firstly, Tallgrass Prairie is located in the Flint hills which aren’t actually full of flint but of Limestone.  According to the Ranger they were described as “Flinty,” (adjective not noun) because of how rocky they were, and it just stuck.  What it did mean is that there was an enormous amount of building material there to be quarried and no expense was spared in building this ranch. Everything was limestone including the barn which is pictured from both front and back. You can see how they utilized the terrain of the hillsides to make large stable buildings.  The same construction was used in the house, where the backdoor exited from the second floor and was level, while the front door and porch on the first floor was also ground level. By building into the hillside they utilized the hill to build easily accessible cold storage.  Combined with some excellent engineering, they piped cool water from a spring on the rise above to have running water, but also into the cool cellars to keep them even cooler and store food.

What a haven this must have been on the frontier, ice, running water, and solid stone that couldn’t burn, right down to the chickens! One of the things I found most interesting was the exhibit of Cattle trails, just off the office.  There were many shown but I took a picture of the this one because I recognized Charles Goodnight, hero of cattleman and friend of John Chisum founder of Roswell. 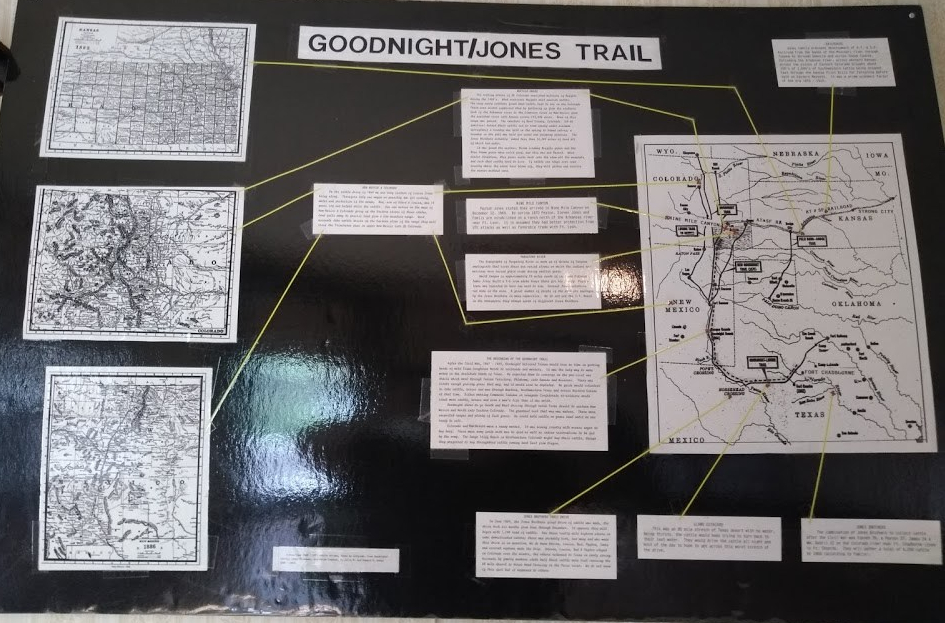 After we toured all the buildings it was time for the bus tour that leaves from the visitor center.  It’s an old school bus which delighted the home schooled children more than it probably should have.  The drive is incredibly bumpy and I recommend using the seat belts.  Wild Thing had to be held in arms because he was frightened and the Ranger was giving the ecology talk as we drove. Tallgrasses once covered 170 million acres in North America and was the most abundant land type in our country.  Less than 4% of prairie remain and most of it is in the preserve.  The ranger giving the tour was very clear that the largest reason it remains is the hilly, and rocky terrain that made this portion of Kansas unsuitable for plowing or it probably would have fallen as well.  It was  home to the Kansa, Osage, Pawnee and Wichita people, and he recommended a trip to the Kawmission in Council Grove to learn more about the native peoples who were destroyed by westward expansion.  On the drive we enter the buffalo range which was thrilling, aren’t they amazing?  And that sky is something to behold, the horizon is so lovely.

There was lots to learn about the ecology of the prairie, and how incredibly diverse it is in insect and bird wildlife.  It is a complex and delicate system that wasn’t understood much.  Fire is a necessity, much like in forestry, but there is some over burning in order to manage it for cattle grazing that is threatening many species including the prairie chicken.  Cattle are also grazed on adjacent land, they range so that they get the nutrients from the grasses and build a strong frame before being shipped to feeding grounds to bulk up and be processed as part of industrial meat production.  The low grasses are much more useful to cattle, hence the burns to clear the tall brush where bison are much heartier foragers and can eat a larger variety of growth.  When we stood on the prairie it was so inspiring, but all these facts and the sheer consumption were disheartening.   We didn’t stay long on the hilltop because of the wind, which had picked up.  It was so windy that we had trouble conversing and hearing the Ranger.  He also spent a goodly amount of time talking about bison preservation  and how the park came to be, most of the information can be found on the NPS Tallgrass Prairie page. Pittsburgh’s county parks North and South Park were both originally part of the bison preservation programs but only South Park still has Bison, and they still participate in the breeding programs.

We returned to the visitor center and finished out our booklets there.  They have really nice native species exhibits, including samples of the different kinds of grasses and dioramas of the animal life.  There is a good movie that is pretty short, but informative.  In the front corner of the visitors center there is a touching table with pelts, skulls, rocks, feathers and other natural objects.  On that table there was also a scavenger hunt to earn an extra patch, as part of their Leave No Trace Program.  It was a really great experience, and a perfect car stop though if you don’t plan to spend the day you might miss the bus ride out to see the bison, but there is plenty to fill the stop without it. 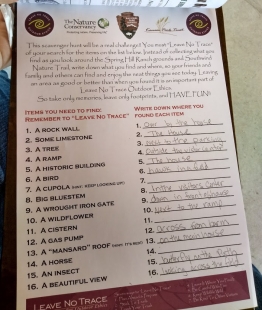