After the Old Courthouse we could barely hold the children back from the arch, they definitely tried to run into traffic and were seriously excited as they approached it.  I think the magnitude, and shininess, just overwhelmed their little raven brains.  The park service is rebuilding the arch exhibits right now so there wasn’t a ton of stuff to see inside.  The Fourth Grade pass will get you into the base exhibits, and the movie but if you chose to ride to the top it is an additional ticket.  We did not chose that because between claustrophobia and fears of heights it wasn’t appealing to the majority of us.  Lemon wanted to ride it though, and pouted for quite awhile.  There is a replica car inside the courthouse where you buy tickets, and we definitely made the right choice.  We did decide to watch the movie, which was AMAZING.  The arch needed to be so accurate it was incredible that they managed to complete it.  It was so emblematic of the time it was built, and I can’t imagine it being built today.  Ranger and Lemon were aching to touch it and sprinted all the way to it!

The Arch represents the “Gateway to the West” and the fruition of Manifest Destiny and was named for Thomas Jefferson because of his authorization of the Louisiana Purchase and his commissioning of the Lewis and Clark Expedition that left from St. Louis. According to park literature it was named before the Arch was built and the name wasn’t well adopted since the arch is definitely the most prominent thing the park.  As I mentioned in my last post, I think Thomas Jefferson is problematic historical figure (as are most of our founding fathers) and removing names from  places of prominence  allows for a more accurate balance of the history, so I think it is an excellent change. I can’t wait to see how the new exhibits handle Manifest Destiny since the Dred Scott exhibits were so well balanced.

Inside the arch there was the movie theater, the arch gift shop and of course the ride to the top.  There is this wonderful relief carving, below, that commemorates the arch builders and the history.  There is also a great tactile exhibit of the materials used to build the arch, including the stainless steel skin that is so appealing! 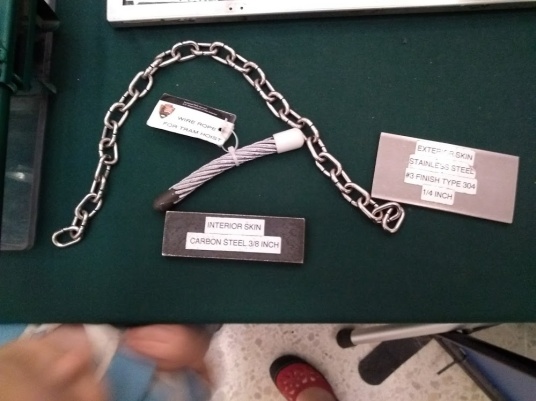 The Junior Ranger book was pretty short both the Old Courthouse and the Arch booklets can be accurately described as leaflets and required only 3 activities apiece.  This makes it an ideal road trip stop, because you aren’t flogging yourselves to finish. I think both children completed 5 activities with no problem, though seeing two things did put us a little behind on our schedule!

The real centerpiece of the exhibit is the movie about the building of the arch.  It is a beautiful concept and the execution was mind boggling.  The sheer physics described, the absolute accuracy that was needed, and the workmanship required was breathtaking.  When they were placing the last piece they realized that they hadn’t calculated the shift of one of the legs due to the sun heating it up, so they ran water over it and said “Hurry up, we have about an hour before it will shift too far.” Can you imagine?  Ranger was extra excited because the steel had the Steelmark on it, which is synonymous with Pittsburgh and still used as our football team logo.  Of course at the time the arch was being built most of the materials would have come from our hometown, which lead Ranger to decide that the arch was also a tribute to Pittsburgh and the Steel Industry. The footage of the workmen on the legs as they rose, and riding up on the piles of steel being lifted by the derricks was intense.  A few times Ranger began panicking on behalf of the workmen and their danger.  Amazingly there was not a single fatality in the building of the arch.

At the end of the movie we made our way to the desk and the kids were given the choice of the old badge or the new badge.  Ranger chose the old while Lemon got the new.