With as strenuous as Harpers Ferry was, I wasn’t going to push another badge stop.  But we got up and were packed, and the kids said “What park are we going to?”  I’m not sure if they just expected me to pack another in or if they were genuinely interested, but I offered them Appalachian trail badge or Antietam.  I was really, really EXCITED, that they picked Antietam, because it was my pick.  This year we have stumbled onto a number of Civil War home schooling activities and checked out some related picture books from the library. One was called “Just in Time Abraham Lincoln” by Patrica Polanco.  It is about boys who are visiting Harpers Ferry with the Grandmother and go to a museum where the keeper lets them try on genuine civil war gear.  Then he lets them through a mysterious door with cryptic instructions and they were suddenly back in time, and serving as assistants to Matthew Brady just after the Battle of Antietam.  I loved the idea of our journey matching the one in the story.

It was blustery and frigid that day, and we were pleasantly surprised that the visitors center was large and that there was a museum. We checked in and got our books, they actually had books for 3 different age levels and even gave Wild Thing (age 2 1/2) his 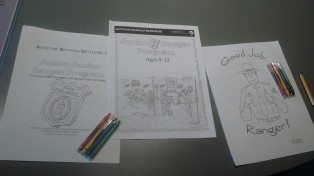 own book, that was mostly coloring.  We started by watching the Antietam movie which was excellent and narrated by James Earl Jones.  His voice is really amazing and while he is listing the casualties, and the endless gore of the day I couldn’t help but think about Darth Vader.  23,000 casualties in one day.  Such an amazing amount of darkness.  The movie showed reenacted charges including Union men literally walking towards the fortifications of “Bloody Lane”, and being shot down as they walked, in order to give another unit time to flank the lane and massacre the confederate troops entrenched there.  I can’t  even imagine how that one could receive those orders and then march towards their death, watching rank after rank in front of them fall and die, without running in the other direction. I also, much to my chagrin, did not realize how far apart the Battle of Gettysburg and Antietam were time wise, and was struck by the letters written by Confederate troops on the march to Gettysburg referencing the clean picked, sun bleached bones left from Antietam where the bodies had been left lying.  And of course they were, how on earth could they have buried 23 THOUSAND people considering the population in the area at the time.

After the movie we went downstairs to the exhibits. The first thing that struck me were the Hope Paintings, done by Captain James Hope from Vermont.  They are large and done 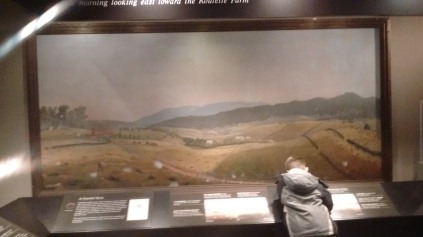 from his battlefield sketches.  I was struck by the vastness of landscape and the smallness of man.  It seemed like a contradiction to what happened here.  Part of the junior ranger book focuses on these paintings and critically looking at them, describing them and then forming an opinion about your favorite, which Ranger really enjoyed.  The younger book had Lemon scurrying through the exhibits on a scavenger hunt for various civil war tools.  She got stuck on “Cap Box” but finally found it around the 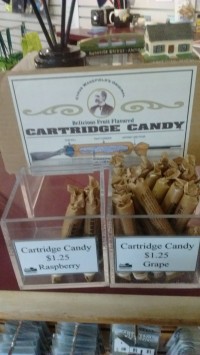 corner.  I spent a great deal of time chasing down Wild Thing, as my husband had done it at Harpers Ferry it was my turn.  This lead me to the gift shop, which was having a sale so we ended up with a puzzle of the Dunker Church and these candy cartridges, which are actually an excellent way to talk about the difference in weaponry AND also make the importance of the cap box known! It is a twisted paper with a gumball in the bottom as the ball and pixie stick powder as the gunpowder, twisted up historically and tastily.  The whole conversation really brought me back to how many people died at this battle and how much harder it was to kill people at that time, even with guns.  The sheer butchery of it all is mind boggling, that so much death came with so much less killing technology.  Below in the bottom right is a picture of a field medical kit, and I can’t even imagine that the wounded survived.  So much destruction and that’s what you have to cope and save people. 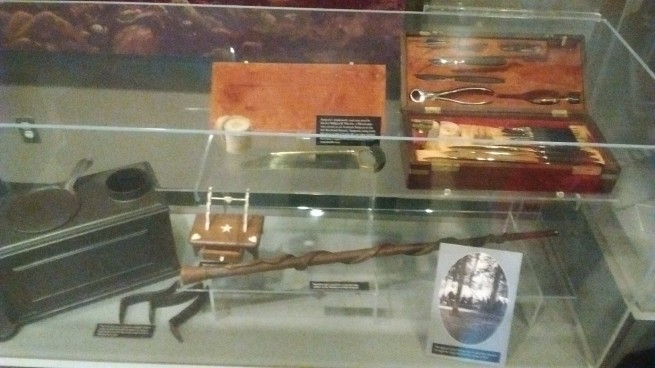 We had the chance to attend a program, it was a flag signal program on the observation floor.  The Observation Floor is great, and is basically a sun room with an amazing view.  You can see much of the battlefield and many monuments.  Lemon had to find 3 different kinds of fence used on site and was able to see them all from the observation floor.  It was lifesaving to not have to take them for a windy cold walk.  The Flag signal program showed how they used flags to signal, much like Morse code later, and discussed the revolutionary  usage of the cipher wheel to decode the messages.  First they were “Trained” in the code and then the ranger went out to signal back to them so they could decrypt it.  You can see Wild Thing trying to steal the spare flag while the ranger is outside, while his brother Ranger is intent on breaking the code. 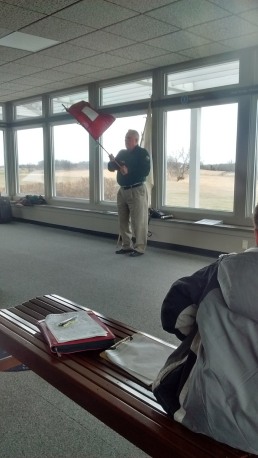 The observation floor was really a life saver in the weather. We were able to complete our Junior Ranger books including answering questions about the monuments and the terrain.  You can see many of the historic buildings, and as mentioned above the all important fencing!  There is a second badge available there, The National Cemetery Badge, but we skipped it because it is close enough to us that we will definitely be that way again and I want to go when there is nicer weather to explore.  This stop is a lot.  Not as much for the kids because numbers are so abstract.  But as we left they asked things like “So like a really busy Pirates game, all those people would be dead, but not say like a football game at Heinz field?” They were making a genuine effort to understand the magnitude of what we had learned. 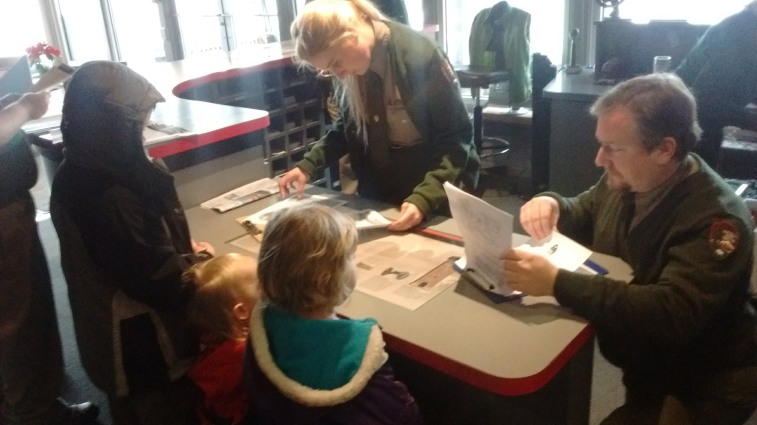