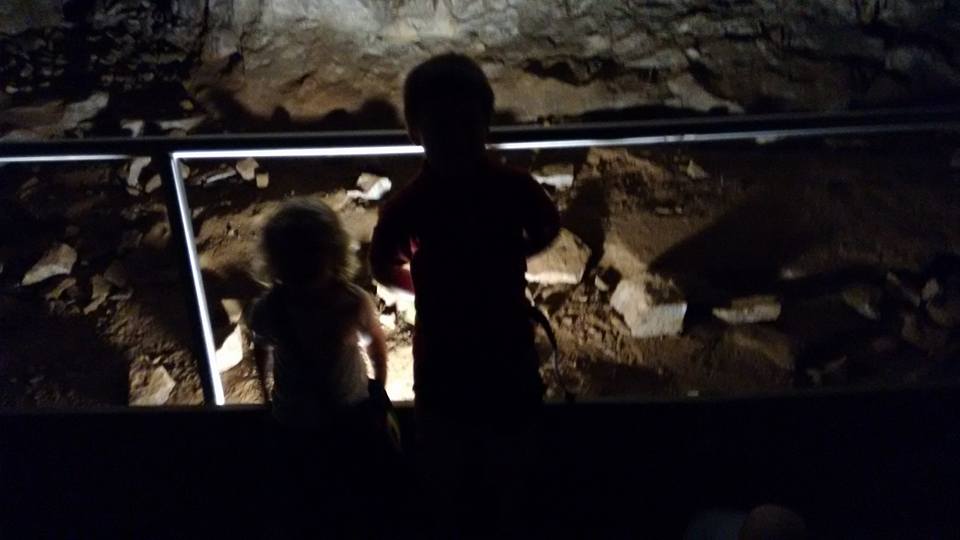 Our first Park stop!  Due to vacation time we decided to leave Memorial Day Weekend because we could have 10 days of travel time for 4 days off from work.  Plus it would give us a cushion to arrive and get my husband set up to work from my sister’s house, which was our final destination. We arrived at the park after massive rainstorms so it was wet and muggy. My excitement was soon tempered by the parking lot.  Apparently everyone knows that the LONGEST CAVE SYSTEM IN THE WORLD is located in Kentucky.  This was further confirmed when we arrived at the tour desk and were told that the soonest tour was 6 hours later AND it was a full 90 minute tour and two miles or so long.  Plus a Ranger would be giving a delightful lecture.  I looked at the faces of my beautiful children, and said “Oh heck no, what else do you have?” Everyone on the 3:15 tour May 28, 2016 doesn’t even know how I saved them from screaming children and preserved their geological learning experience. Also this was our first experience with DO NOT NATIONAL PARK ON MAJOR HOLIDAYS.  Unless you can’t avoid it, or there is no other opportunity to see it.

The helpful Ranger suggested we just walk down and do the self guided tour and she was RIGHT!  We picked up our Junior Ranger booklets at the desk and headed out.  There is a lovely path from the visitor’s center down to the Cave entrance, it is sloped but there were benches all along the path. We stopped to read signs to help find information for the J.R. booklet and to look for wildlife for the cross off scavenger hunt.  When we reached the cave entrance we were told about white nose syndrome and cautioned to follow the protocol upon exit as well. Now remember that as a native of New Mexico my baseline cavern is Carlsbad.  So I was completely underwhelmed with the actual cave, BUT it was very interesting as it is a granite cave rather than limestone and it has a ton interesting historical facts as well, like it was stocked as a fallout shelter!  My husband who had not been to Carlsbad at this point, thought it was great as did the kids.

We hiked back up the hill and finished our booklet.  My children practically choked with excitement when the ranger swore them in and handed them gold shiny badges.  I want to take another moment to mention that it was memorial day weekend, and that is NOT THE TIME to visit, but if you do definitely call ahead and reserve a tour months in advance.  Not taking one of the longer tours through the better caves wasn’t a deal breaker for us because we had small kids who wouldn’t have done well on that kind of tour, but better planning could have yielded a more interesting visit!