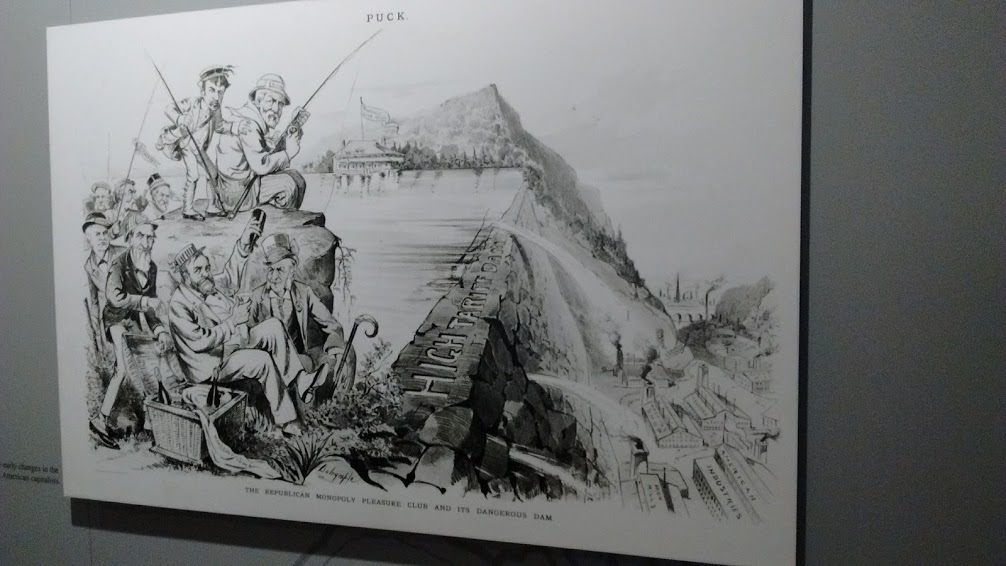 We decided to take a day trip up to Johnstown to see the flood Memorial.  I knew nothing about Johnstown other than there was a flood and it was near the oxbow bend of the railroad.  Imagine my intense lack of surprise when I found out that the flood was caused by the wealthy elite of Pittsburgh like so may other reprehensible western Pennsylvania historic events.  We began our exploration at the Lakeview Visitors center, which is situated in the old barn on Lakeview Farm which belonged to Elias Unger, the last President of the South Fork Fishing and Hunting Club.

Lake Conemaugh was a man made lake situated behind an earthen dam, and existed for the sole pleasure of wealthy Pittsburgh elites who formed the South Fork Fishing and Hunting Club.  All the usual names are found on the clubs membership roles, Carnegie, Mellon, Frick, the list goes on.  It’s a good bet that if there are Pittsburgh charitable landmarks named for them, they were fairly horrible robber barons who exploited both the local environment and labor population.  In Johnstown they were no different.  They acquired this bit of land and repaired the existing earthen dam, without consulting an engineer.  So when the a huge storm hit there was no emergency over flow, and no way to release the pressure.  The resulting collapse killed 2,209 people and ripped spectacularly through train yards and a barb wire factory before hitting Johnstown.

At the visitor center you can watch the film Black Friday, which details the flood timeline and all the it is dramatic and filled with talk of ghosts and screams.  It might be too spooky for some children but mine are strange

anyway, and it didn’t bother them.  It really gave a sense of how terrifying it must have been and how little warning anyone had.  The walk through exhibits are nicely done, and it was fairly easy to direct the children through to the facts for their Junior Ranger booklets.  There is a fantastic sculpture of a mess of flood trash and tree roots sticking out of the wall, very impressive!  The lower floor has a great map that shows the terrain and uses lights to show the flood path and the casualties.  There are also some really interesting tidbits about the Red Cross, Clara Barton, and disaster fundraising. \

Johnstown is pretty small exhibit, but has lovely hiking paths and you can head over and checkout the old club building.  We didn’t get a chance to see the club but we did do a short hike.  We did have the absolute BEST Ranger, Ranger Jonathan was great.  He was so involved and thrilled to interact with the kids and spent a great deal of time going over their books with them.  Living in Pittsburgh surrounded by Carnegie Libraries, Phipps Conservatory, Frick Park, Frick Mansion, the former Mellon arena, and Carnegie Mellon University it’s easy to forget that these big names were real people and to gloss over the reasons we remember them.  We remember them because of their severe exploitation of this region for personal gain with no regard to the environment, the city or the people who call it home. And their gifts to the city are a meager recompense for the destruction they wrecked while pursuing wealth and industry.