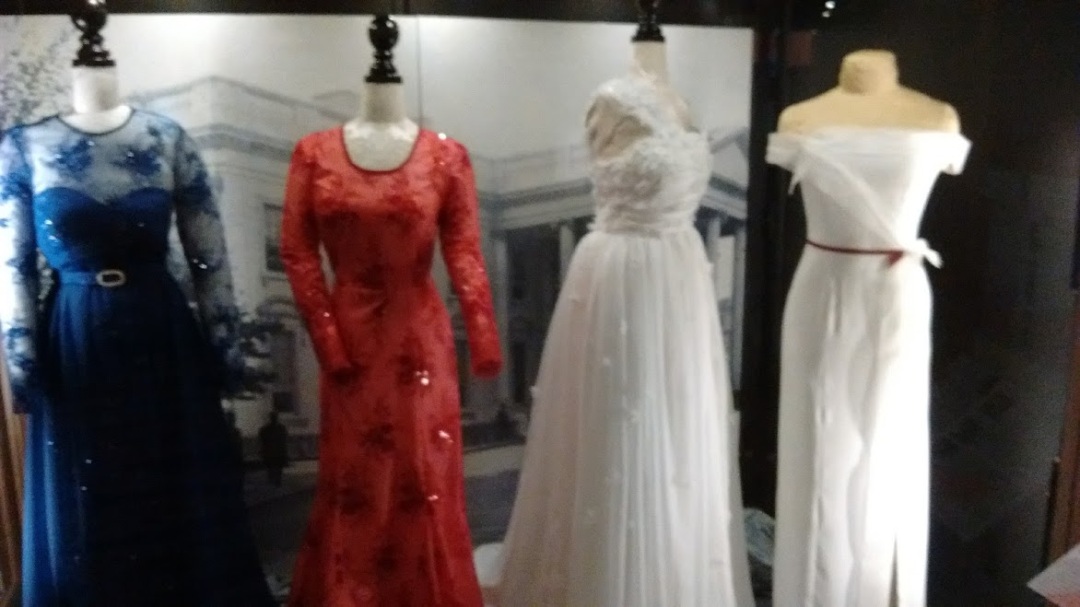 Have you ever had weeks where your family won’t stop fighting? Week after week the kids were arguing and we were grouchy. Laying in bed one night I made an executive decision that a Road Trip was the answer to our problems.  Nothing says RELAXING like throwing kids in a car, without electronics, because clearly I am a sadist. With the limits set I decided Canton would be our first stop and we would see the First Ladies National Monument. It was an easy drive and we arrived at the parking lot and pressed the buzzer and were greeted with “Good morning, do you have a scheduled tour?” OOOPS.  Luckily we had decided to vacation Wednesday-Friday and 10 am on a weekday isn’t super busy.

The Foyer and greeting room are well furnished, rich wood and carpets and it’s all very well done.  We paid, receiving a discount with our National Park Membership, and were given a time for the “McKinley House” tour  then led to a room to watch a movie about inaugurations.  There was a great little table with crayons for the kids and they set to work on their First Lady Badge books.  The movie was fine, but I wanted more FIRST LADY.  So I wandered back into the main room and began to look at dresses with Lemon. She and I picked our favorites and I pointed out the other small display of china.  If I am being perfectly honest there wasn’t much FIRST LADY ACTION.  The movie was really about inaugurations in general, there were inauguration ball dresses and the small display of china but no timeline of first ladies.  No accomplishments.  I didn’t even see a complete list of First ladies.  Overall I was disappointed.  First ladies are accomplished women in their own right, individual presidents get singular monuments and libraries, so I just expected that the collective “First Ladies National Monument” would at least pay hommage to the individuality and intensity of these ladies.

The bulk of the First Ladies NM is actually a tour of Ida McKinley’s house.  Which is interesting and has been restored well.  I didn’t know much about McKinley but he seems

like a stand up guy and their life together was dramatic and tragic.  Also Ida crocheted slippers for fun.  A LOT OF THEM.  I won’t spoil it for you by telling you how many.  If you are in Canton I would visit this, but I wouldn’t drive out of my way.  The badge is actually a lapel pin which different and very well done.  The staff was nice and recommended this great ice cream place for lunch, it was great, almost worth the drive to Canton all by itself! Popular since the 1930’s is a definite selling point to me and I regretted sharing this delicacy with my children. Definitely get a basket of fried things before your ice cream, you won’t regret it.

Once we were full of ice cream we decided to head over to the McKinley monument, since we were freshly aware of his integrity and thoughtfulness.  I have to say I found the monument breathtaking.  The wide expanses of granite and the” simple” hilltop shrine were inspiring.  There are a lot of stairs and tons of kids using the wide rails as slides.  We passed at least a dozen people running up them like Rocky and one poor soul doing leg lifts on every stair.  There is a small science museum and the McKinley Presidential library at the base.  We skipped the library because we thought there would be whining to go to the science museum and we were ready to not chase Wild Thing anymore.  Life lesson from this trip: Lugging a toddler on historic house tours is a drag because you can’t touch anything, not even the re-creation wall paper.