This was the first stop on our big summer trip and it did not disappoint.  We did absolutely no preparation on the Wright brothers or flight so we walked in cold.  As I drove away from the downtown area and into an older shorter business district, I was reminded of the neighborhood in Roswell where I grew up.  It always surprises me to find New Mexico style buildings elsewhere, because so much of the style is dictated by the harsh climate.  But I suppose that part of Ohio isn’t much different from the Pecos Valley.  I really appreciate that Ohio has wide open skies in a way that Pennsylvania just doesn’t and all that sun didn’t hurt either! 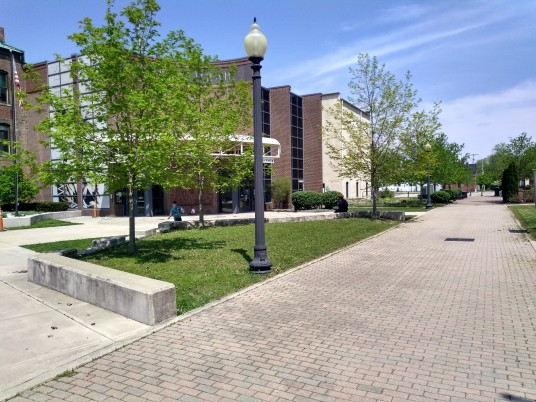 Entering the Dayton Aviation I was thrilled to find that Paul Laurence Dunbar had his own exhibits RIGHT THERE!  I mean, how amazing is that?? Which makes total sense considering he went to school with the Wright Brothers, hooray  Dayton native sons!  My

enthusiasm caused the Park Ranger to immediately deduce that I have literature degrees. He handily provided the kids with their badge books, which actually had two badges attached one is for the airfield and one for the site.  Because this was our midday stop we were only going to do the visitors center, but we did tuck the books away because Dayton is close enough to do again. The first exhibits were biographical background of both the Wrights and Dunbar as well as an introduction to “inventions” from the area.  There are buttons where you can hear Dunbar poetry being read aloud in all it’s glory, and anecdotal story telling about the Wrights getting their first helicopter flyer toy. Wild Thing was incredibly pumped about the buttons! My husband was in charge of Wild Thing this time because I was fan girl-ing all the Dunbar exhibits.

The next room was a historical grocery shop exhibit which had my kids excitedly pointing out the large display of Heinz items that were “for sale”.  Yes, my children manage to make every exhibit about Pittsburgh! This was neat though and in addition to the bizarre pickled Heinz offerings, there were displays of dry goods, canned goods and even sugared dried fruit to really set the tone of what was available at the time.  The children enjoyed finding labels that we still see today like Arm and Hammer! 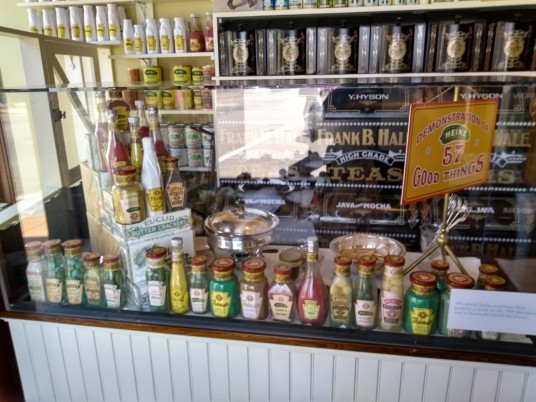 So the history parts were fun, but the flying exhibits were where it was at, though, Lemon seemed partial to the printing presses, due to her love of Kit Kitteridge and typewriters.  There were really good exhibits on how the Wrights studied flying, from their first inspiration of the whirly gig toy to writing to the Smithsonian for all the

information about flying. It was an interesting moment to explain that they wrote to a museum for reference materials because neither libraries or the internet were available at the time.  Plus a bit about primary sources and communicating with other inventors.  The Junior Ranger book did address research in an activity which I thought was nice.   This was my favorite of the flying models because you could move the hip cradle and it would move the plane, which really helped me understand the process better than the pictorial descriptions. We spent a lot of time looking at the printing presses and inventions, before chasing Wild Thing upstairs where he discovered the Parachute museum!  This was a fun little space that that included a fighter pilot ejection seat and allowed you to touch

different kind of parachute material through the years. On the second floor there is alot more about Dunbar, unfortunately Wild Thing was on the move and I missed some of the movie.   The other neat portion of the exhibit is the bicycle shop that is intact across the way, but is only open at the top of every hour.  We hung out waiting and found this Free Little Library located right behind the visitors center, we put a couple of the tired car books in and grabbed a couple new ones!

The Bicycle shop was cool and had some interactive displays that had to do with steering and illustrated how the bicycle building informed the Wright brothers airplane designs.  Wild Thing was pretty intent on yanking them and the Ranger assured us he wouldn’t damage them which was comforting. The Ranger was really, really great and we talked a lot about his graduate studies which were fascinating.  In fact, I totally stood there talking to him while the entire family got in the car, lol.  My family laughed at me for how passionate I can get in discussing things. 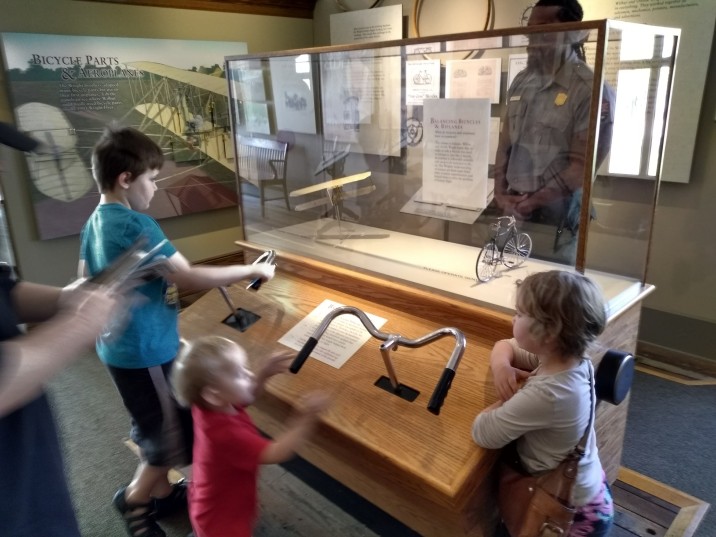 Dayton Aviation gives the choice of a patch OR a badge, which was disappointing that you had to choose and both kids chose the patch. There was an airfield to visit too, and it turns out there is a ton to do in Dayton, I think we might make a long weekend of Dayton in the fall to complete the rest! 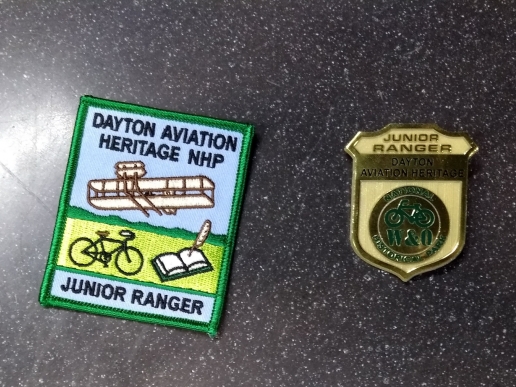