So this is the time of year home schoolers panic, at least the ones I know!  I am sorry that I have been dropping the ball with my blog, but we just closed down our school year and I have a backlog of parks to tell you about.  Do you like mid-century decor?  Tchotchkes? Maybe a huge fan of Black Angus cattle?  If so have I got a park for you!  While in Gettysburg we took a bus from the visitor center to the Dwight D. Eisenhower National Historic Monument.  Your annual pass will get you tickets, or you can buy them at  the visitors center as well.  The bus leaves from the Gettysburg bus stop at the top of the hour and departs from the Eisenhower farm on the half hour.  It took us about two hours but we almost missed that cut off, but if you miss it you get another hour and there are surely enough grounds to walk.

So a few things are really neat about this site, they have a a pretty interesting secret service post in the old dairy, with all the old top of the line technology from the 60’s.  It’s pretty great trying to explain any old technology when your kids don’t even know what a telephone actually looks like or how it works.  There is a tour that walks you from the bus, past the dairy and to the house.  The tour through the house is a guided one and is really just poking your head into most rooms that are gated and have alarms on them.  The decor is really great, and it is nice to see the bathroom that launched the pink bathroom craze that still haunts many cities!  You pick the Junior Secret Service book up right inside the front door of the home.  Once you are done with the house, which was relatively quick for us, you get to explore the grounds and most of the activities are scattered across the farm.

There is a lot of ranging, so hopefully the weather holds for you.  It was partly sunny and with a briskly, cold wind.  We got to see where the helicopter landing pad was (first President to use one) and the old security spotlights.  The play house where the Eisenhower children played is is there, and the greenhouse that once got a site director fired is still standing, (hint- don’t blow off a former first lady, especially when her grandson is married to the sitting President!) My favorite tidbit of knowledge (via our Gettysburg guide) was that Eisenhower was stationed as a young man in Gettysburg when the War Department was still in charge of Gettysburg.  They decided to make it a tank training ground, but didn’t actually give him tanks.  So he attached giant guns to pick up trucks and did maneuvers all around the historic battlefield and shelling all those historic ridges. Which is when he fell in love with the area.  It just seemed like such an American moment to fall in love with a historic place while basically destroying it.

We ended our trip at the visitors center where there was a pretty good movie about the accomplishments of Eisenhower. He was a really active President and has a huge legacy. 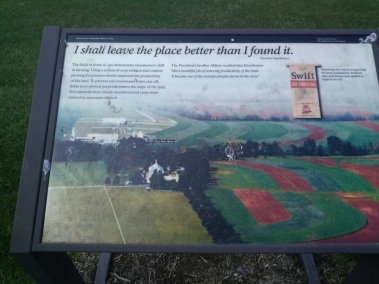 The interstate highway system has come up a lot in our more recent travels,  and he really was a man ahead of his time agriculturally speaking, and talked a lot about enriching soil and agricultural practices as you can see in the pictured quote.  There is definitely a sense of the romantic pastoral in his love of the land and of Black Angus Cattle, and the movie footage shows him conversing as a “simple man”. But then it gets a little Mad Men between the decor and all the tales of his Men-folk only steak and cigar parties, and you remember that image is pretty much projected anyway so the juxtaposition is quaint.   I wish we had been able to start there, but it is very clearly “on the way out.”  Inside the small visitor center is a little gift shop and is where you will find the Rangers who can swear you in as Junior Secret Service Agents,as well as your passport stamp!  You get a tin sheriffs shaped star, which tickled the children.