So we are pulling into St. Louis and I am looking forward to the Ulysses S. Grant NHS and Lemon looks up from whatever she is doing and starts screaming “OH MY GOD LOOK AT THAT, I WANT TO GO THERE!” In a moment of divine accordance Ranger also begins to scream the same thing, and they are all pointing at the Arch.  The highway swings around and there is the base of the damn thing and the exit practically points at it and that is why you aren’t reading a lovely tie in to our Civil War unit last year.   EXCEPT- You actually are, because located before the arch between the parking garage and the park where the arch stands is the Old Court House where the Dred Scott case was argued. For those of you who don’t remember this is the case that pretty much kicked off the Civil War, when Dred Scott sued for the freedom of himself and his wife because they had been living as slaves in a state where slavery was not legal.   Basically the Supreme Court told Congress that they could not prevent the spread of slavery to new Western States and the entire issue came to a head because of interstate travel.  Plus, slavery was economically becoming less viable as well, which was leading to even more extreme abuses and Missouri was on the front lines of this clash.

The exhibits are really well done.  They point out the hypocrisy of Thomas Jefferson, “liberty and justice for all” and yet was a slave owner.  There is also excellent information 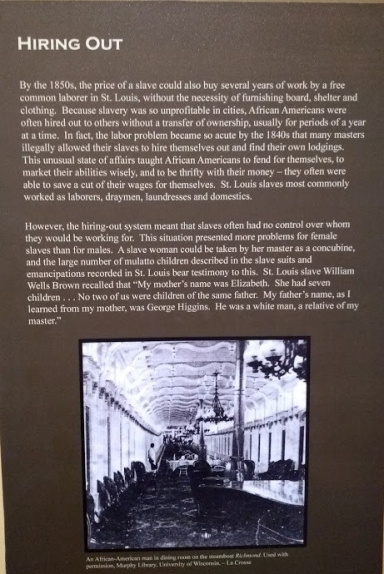 about the Underground railroad and why Slavery was becoming untenable from an economic perspective due to the influx of incredibly cheap labor forces of Irish immigrants and other Europeans. The additional costs of Slave ownership in an urban environment was leading to the breakdown of the system and the practice of hiring out, which lead to even more horrific abuses.  With interstate commerce on the rise the conundrum of whether a slave could be moved freely between states came to the forefront. Because if you took a slave to a non-slave state then it was illegal to hold him in bondage, so did that mean he was free?  The Supreme Court said no.  And ruled that no person of African descent could be a full citizen ever. Furthermore that the Missouri Compromise, which was meant to hold the balance between slave and non slave states, was not enforceable.  One of many horrific moments in the history of the United States.  But it did polarize people into action, dividing them into factions and making those factions uncompromising and catapulted us into the Civil War, the bloodiest conflict in our history. It is an interesting reflection of our current uncompromising political system.

There is a movie and the badge book is fairly easy, my kids were not nearly as interested in this case as they should have been, which I will chalk up to their age.  I was so interested in the exhibits that I kind of left them alone so I could look myself.   I learned a lot about the urban slave market and the problems that were inherent in urban slavery.  You hear a lot of moral righteousness from the Northern states in history.  But the reality is that urban slavery (and therefore Northern) was less profitable because of the cost of room and board, and the availability  of cheap immigrant labor.  In the grand scheme of things the North was far less righteous, and even Abraham Lincoln was flawed in his treatment of black Americans.  The exhibit made no bones about the power grab which was circling around the slavery issue, and I liked that, and it’s honesty.

It is a beautiful building with a lot of history. The dome is handsomely painted and in excellent condition.  There are restored courtrooms to tour and it really gives you a feel for what it must have been like during the time of the Scotts as well as an additional courtroom that displays a later time period.   This statue depicts the Scotts together and is a tribute to their struggle for freedom in accordance with the laws of our country.

This monument used to be called the Jefferson National Expansion Monument but recently changed it’s name to Gateway Arch National Park, which I prefer.  I prefer it because it is part of our nation coming to terms with what we are founded on, and blindly glorifying men like Jefferson who had incomplete ideals on liberty and celebrating concepts like “Manifest Destiny” and westward expansion ignores the genocide and oppression that built our nation.  We can’t change how it happened, but we can be honest about how it was done and how we still struggle with that legacy today.  This is one of the most moving parks I have been to and it deals with our ugly nation building history.  They hadn’t received the new badges here yet so the kids got the the Jefferson Expansion Old Courthouse Badge. 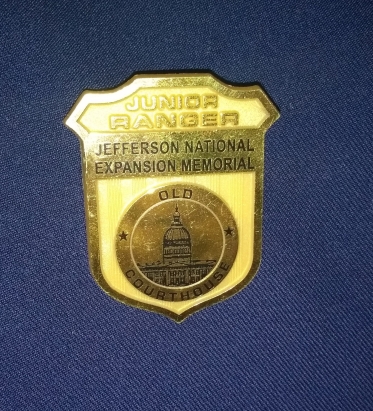